This is an interesting problem that we’re going to talk about today. I’m currently working on adding framebuffer support in RTEMS Beaglebone black and the approach I have selected for doing the project is to use code from FreeBSD and port it to RTEMS, so, basically I’m importing the am335x_lcd driver and the tda19988 driver from the FreeBSD in rtems-libbsd and the plan is to port the FreeBSD driver to RTEMS. But the issue with this approach is that, the drivers imported from freebsd uses the iicbus interface in the FreeBSD, on the other hand RTEMS has it’s own well supported I2C stack that the RTEMS applications use. We can, of course, choose to just replace the RTEMS I2C with the FreeBSD iicbus stack but that will potentially break every application that used the RTEMS I2C driver.

So how to address this then? The answer is to add an adaptation layer on top of the rtems driver, and connect it to the FreeBSD API.

The I2C Adaptation layer for libbsd

This is a very interesting situation and hence needs some interesting solution. So we’re going to approach this problem by connecting the iicbus interface of FreeBSD with the RTEMS I2C interface by introducing an i2c-adaptation layer in between. So basically what we’re doing is letting the RTEMS driver deal with the hardware, and on top of it, we’re accessing the created I2C device as an application layer to RTEMS and connecting it with the FreeBSD API by acting as a driver to the FreeBSD interface.

The Figure below shows the approach clearly. 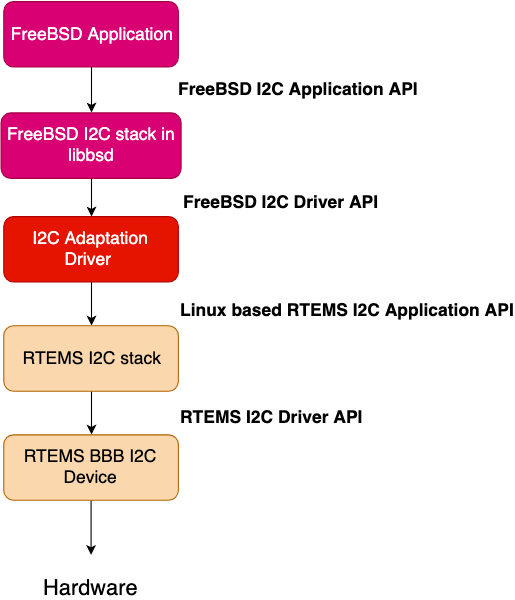 The Adaptation layer is nearly complete and I hope to merge it to the main repo soon. Since it doesn’t touch any other application part, it can be merged separately, independent of the rest of the Framebuffer work.

Hope You have found this article interesting. I would really appreciate if you’d like to add any ideas or approaches used in some other projects, and start a discussion below.

UPDATE : The I2C adaptation driver is complete and has been merged in the RTEMS Upstream repo. the commit link

Thank You for stopping by!